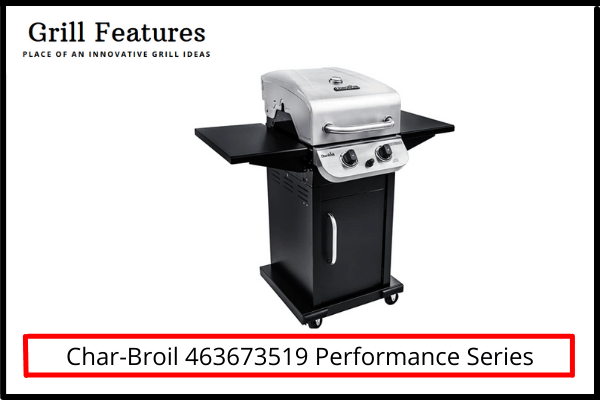 Running out of the space in your patio and gallery as living in the apartment, this Char-Broil 463673519 Performance Series does an incredible job of getting fit in the side of the already-slimmer space by the side.

But do NOT take its compact size and being narrow in width, it grills the perfect meals just like any other grillers available in the market that does exceedingly well in the performance.

Comes with two burners in the cabinet-style with the heat power of over 24,000 BTUs that operates with a propane grill where the tank does fit into the cabinet. Open the cabinet and get the propane gas tank seated into it for secured placement where it would drastically minimize the chances of getting it jolted and fell on the floor even though if you push and move the griller all around with being ignited while grilling your meals as the attached gas tank does not have to be placed on the floor.

Spacious and the greater primary cooking space of over 300 square inches and being porcelain-coated cast-iron grates and having equipped with 100 square inches of the swing-away rack which also got the porcelain-coated grates that do not let the meals to stick and burn when cooking but would ultimately give you the juicy experience by burning it up a little from those sides — adding the juicy effect doubling the yummilicious taste to the greater extent AND resemble like a pro cooking the favorite grilling stuff.

Crafted with the stainless steel-made lid with a UFC that assures the thickness and the material used is of the highest quality to trust for years (and Char-Broil hardly has its customer ever offended by the performance its grillers provide!) and adding to the style with the increased durability along with having the lid-mounted temperature gauge to keep the heat in your control all the time.

Having that lid-mounted temperature gauge allows you never to open the lid to test how much the time is left by optically examining (only the professionals have this sort of experience to judge by eyes). The temperature would tell itself how much the time would be left instead because the lid’s frequent opening could deprive the required heat to grill meals up.

Electronic ignition simplifies life as it takes swift startups without finding and lighting the matches and would hardly give you a hard time igniting it up in its entire lifetime.

And the metal side shelves with the foldable functionality to get you conversing more space, so when not in use, just lower those shelves down for the security of the shelves as well as placing any burden over them could get them bent unnecessarily.

Requires the assembly the most as it delivers all in unassembled format. Still, of course, it would take a little more time to get it fully assembled just because you are new to this, but following the guide by heart would never want you to call in the professional to get it assembled for you.

Sits the grill on four caster wheels, where two get locked up to ensure it does not mobilize and stay stable while using it.

The burners are made of hardened stainless steel to live for longer life and lasting performance and offer the temperature range to control using the dual adjustable burners to raise the heat per your requirement.

Having the removable grease pan coated with porcelain stuff that lets you do the cleaning with convenience and replace without inviting the rust ever but still, make sure to wipe off all the drops of water if spilled accidentally, which could turn disastrous over time.

Stylish and compact, this space-conversing griller from Char-Broil 463673519 Performance Series has this word deliberately fitted into its name that never makes you experience the underperformance EVER.

GrillFeatures is a participant of the Amazon Services LLC Associates Program, an affiliate advertising program. It is designed to provide a commission for the websites in earning an advertisement fee by means of advertising and linking to Amazon.com products. As an Amazon Associate, we earn affiliate commissions from qualifying purchases.